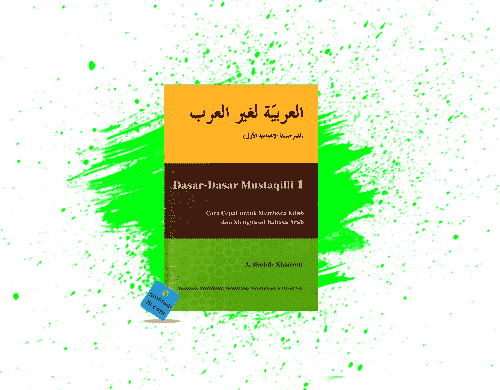 That only 0.5 Indonesian Muslim residents are able to read the Qur’an well.

The next question is what percentage is able to understand the Qur’an and Al-Hadith correctly?

With the background of concern, the output of Arabic learning in general, including reading the book without harokat which is considered still very very weak and of course very very need to be improved both at the level of formal education, madrasa diniyah and even Islamic boarding schools in all corners of the country and Southeast Asia. general.

Based on the facts above Kh. A Shohib Khaironi (the inventor of the Mustaqilli method) was encouraged to carry out scientific studies of Arabic grammar on a variety of sources, literature and Arabic in general then Alhamdulillah more or less 3 years the solution has been found with the birth of the Mustaqilli method which is actually the original book named after the book “Al-Arabiyyah li Ghoiril ‘Arabic” or Arabic for non-Arabs in which contains a way of learning Arabic with approaches, schematics and examples that are relatively very very simple and in accordance with non-Arabian cultures and cultures especially Indonesia and Asia Southeast generally.

Then Mustaqilli is divided into 5 levels, the first level is intended for those who have no basic at all or have not been able to write, read and converse. Then there are level two, three, four which in general have been specifically designed according to the ability of participants and finally there is the book grammar or nahwu & shorof which is presented through a schedule approach, a scheme that can facilitate non-Arabs to learn it and this book is named “Audlohul Manaahij “.

National and International Appreciations and Awards

Appreciation from scholars and experts in world jurisprudence that are already familiar to us, namely Prof. DR. Wahbah Musthafa Az-zuhaily:
“This book is the work of someone who has deep knowledge in Arabic. With his method, he makes complicated Arabic grammar simple and easy to understand “.

Appreciation of Arabic Language Experts at Al-Azhar University, Cairo Egypt, Shaykh DR Basyiiri Abdul Mu’thy:
“I am an Arab who has never seen the easily understood Nahwu Shorof mu’jam book written by a non-Arab, where the Arabs themselves did not exist or have never written with this method up to now”

In the United States, this book is selling well. In fact, booksurge LLC (Part of the Amazon Group of Company) based in Charleston, South Carolina-USA helped expand the spread of this book to universities and educational institutions in the United States, particularly in the fields of Arabic Programs, Islamic Studies, Middle And Near Eastern Studies. Besides in America, this book also received wide acceptance in Iran as one of the reference books with the best-selling book category that received a five-star book rating. And even at Ohio University, this book is a major reference because it is very systematic, complete, easy to understand, and combines theory with practice with graphical, table and schematic approaches.

Ustadz Agus Shohib Khaironi, the writer of the mustaqilli method on January 17, 2009 has received an award from the Indonesian government along with 6 other national figures through the Department of Religion as figures who are considered to have given a lot of positive influence and change to the people.
The world of education and pesantren’s reception in Indonesia towards the presence of this mustaqilli method was very good. The Ministry of Religion has conducted national training of madrasa teachers on the mustaqilli method. In addition, this method has also been transferred to Islamic boarding schools in various regions such as Lampung, East Java, Central Java, Kalimantan and various other regions. With this new method, even the Islamic boarding school Ushuluddin in Lampung has done quite well in Arabic, both at the provincial and national levels.

It turned out that the Indonesian people’s response to the mustaqilli method was not limited to the world of formal education and pesantren, but the general public from various circles also welcomed it very well. This is evident from antusia